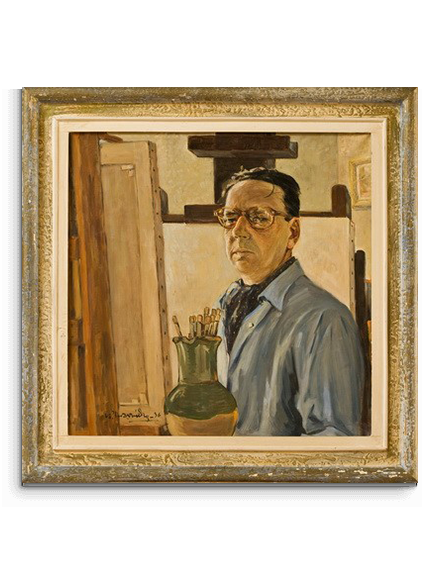 Victor Ioannides was born in Limassol in 1903. He was the youngest of the four sons of Neoklis Ioannides and Helen, from the Skyrianides family.
His father Neoklis, was a well known wine manufacturer and Banker of Limassol. He traveled to Egypt to his uncle, who was a winemaker, at a young age, acquiring enough knowledge to return to Cyprus and create his own wine factory.
Victor Ioannides’ mother was Helen, from the Skyrianides family, owners of the Forest Park Hotel in Platres.
His talent in painting and music was evident from a very young age. During his school studies, he was a member of the Limassol Mandolinata Orchestra, in which he played guitar and violoncello for many years, under the guidance of the Founder and Director, the great musician Chourmouzios.

Upon his graduation from High School in 1921 and with the initiative of his father, who preferred a secure professional future for his son, he worked for a small period of time as an accountant in a big commercial company. His inherent talent and his love for painting and music, led him to refuse a promotion in the company and to resign.

During that same period in 1922, he meets the poet and artist painter Nicos Nicolaides, with whom he develops a close friendship. A similar friendship is also developed with his Art Professor in High School and later collaborator and associate, George Fassouliotis.

Clearly influenced by both and with their encouragement, he decides to travel to Athens to study Fine Art.

He studied at the Higher Faculty of Fine Arts in Athens from 1923 to 1929 with professors Georgios Iakovides, Spyros Vikatos, Nicolaos Lytras and Zacharias Papantoniou. He graduated obtaining the grade of “Excellent”.

During his studies he worked as a permanent sketcher in several Athenian newspapers, “Eleftheros Typos” (1923-24), “Elliniki” (1926-27), as a reporter in the “Proodos” magazine (1924-26) as well as an illustrator and graphic artist in the Greek Encyclopedia. Together with Fokionas Dimitriades, Kastanakis and Antonis Protopatsis, the artist was a founding member of the Association of Sketchers of Athenian Newspapers.
During the same period he also worked for the Soulis & Constantinides Civil and Architectural Office (1926-1930).

In 1931 he returned permanently to Cyprus, at his birthplace, Limassol.
He was very much absorbed in intense experiments and research on the various chemical chromatic mixtures with a view to discover a formula similar to the one used by the Old Italian schools of Art, something which he finally achieved.
During this period he traveled for this purpose to Italy and France.
The colour mixtures are prepared on fire and when applied on the surface tend to give the maximum transparency and brightness to the painting, the surface of which is similar to porcelain.

He produced plenty of paintings using this technique which he himself considered as his most important contribution to Art, and for which he received very favorable comments from art experts.
His most common subjects using this technique were still life, portraits and landscapes, and they can be identified by the, deliberately given, old appearance of their surface.
He also produces a variety of works using oils and acrylics. His subjects are mainly drawn from the landscape and seascape of Cyprus, with an obvious impressionist character.
He is very productive in drawing, both ink and watercolor.
He traveled and studied Art in Paris and London.

In Limassol in 1936, the artist along with his close friend, artist and teacher George Fassouliotis, set up a partnership, the Atelier, which was the first establishment offering professional services in advertising and decoration. At the same time, they jointly published one of the first humorous newspapers of Cyprus, the so called “Yelio” (Laughter). One year later in 1937, Victor Ioannides took over as chief editor and sketcher of the newspaper. He also worked as an art teacher at various schools private and public, both in Limassol and Larnaca (1931-1966). In 1946 he married Maroula, daughter of Isidoros Macrides, well known businessman and landowner of Limassol. With Maroula, he had a son named Stelios. In 1963 he represented Cyprus at Alexandria Bienalle Exhibition.

He has also participated in many group exhibitions of contemporary art, both in Cyprus and abroad (Greece, France, UK, Egypt, U.S.A. etc) as well as in almost all the Panhellenic group exhibitions which took place between 1960 and 1973. Victor Ioannides is the first Cypriot student who graduated from the Art School of Athens (Metsovio Polytechnio). He was also the first amongst the Cypriot artists, who exhibited his work in a solo exhibition in Cyprus, thus contributing to establishing the practice of organizing art exhibitions in Cyprus. His first solo exhibition took place in 1951 and the local press at the time described him as the “pioneer of the conjectural movement in Cyprus”. He presented 22 solo exhibitions in total, both in Limassol and in other cities of Cyprus, starting from 1951 until his death, in 1984.

His paintings can be found in various private collections in Cyprus, London, Vienna, Paris, America and Canada. They are also part of various Museums, such as the National Art Museum of Athens (Alexandros Soutsos Museum), the Municipal Museum of Contemporary Art of Rhodes, the National Art Museum of Cyprus, the Pierides Museum, the Limassol, Larnaca and Famagusta Municipal Galleries, as well as Governmental and public Institutions such as, the Presidential Palace, Ministries, the Archbishopry of Cyprus, the House of Representatives, Embassies, Banks e.t.c. Victor Ioannides, together with Adamantios Diamantis, Tilemachos Kanthos and George Pol. Georgiou, are considered to be the middle generation of Cypriot artists who took over from the older generation of artists such as Nicos Nicolaides, Andreas Thomopoulos, Vassilis Vryonides and Ioannis Kissonergis. Victor Ioannides died on the 6th June 1984.

* In 1936, the Atelie of Fassouliotis – Ioannides was awarded the gold medal for the creation of a very successful advertisement during the Agricultural & Industrial exhibition organized in Limassol.
* In 1953, the artist was awarded the gold medal for his painting with which he participated at the Platres Festival.
* In 1962, one of his paintings obtained the first price at the International Flower Show held in Limassol and a commemorative medal was awarded to him for this purpose.
* In 1977, a painting depicting the Limassol port, was selected by the Cyprus Government and became a stamp of the Cyprus Republic.
* In February 1984 at a ceremony organized by the Municipality of Limassol, the Mayor offered him the gold key of Limassol in recognition of his contribution to the cultural and artistic life of his homeland and particularly to his hometown.
* In April 1991, in memory of the seven years since the artist’s passing away, the Mayor of Limassol named a public square after his name, the location of which is opposite the house where he lived. A sculpture of the artist has been placed within the square; the Minister of Education at the time, Mr Christoforos Christofides inaugurated a small ceremony that took place on site.

After his death, two retrospective exhibitions, as well as some other events took place.

* The Municipality of Limassol named a room in the Municipal Gallery of Limassol after his name. All the artist’s paintings in the Municipal collection are placed within this room together with some additional paintings donated by the artist’s family.
* A few months later, some of his paintings and drawings that he was asked to produce prior to his death, were selected to appear on various journals, posters and handouts in connection to the celebrations for the Year of Old Limassol, which was organized by the cultural Association of Nemesos, in co-operation with the Municipality of Limassol.
* In memory of the five years of the artist’s death, and on the occasion of the opening of the Nicosia branch of Argo gallery of Costas Serezis on the 22nd May 1989 in Nicosia, the first retrospective exhibition of his work was organized. This exhibition formed part of a series of exhibitions by this gallery, to present the work of the first three Cypriot artists of the 20th Century, namely, Adamantios Diamantis, Telemachos Kanthos and Victor Ioannides.
* In memory of the seven years since the artists passing away and on the occasion of the inauguration of the Artist’s sculpture on the 21st of April 1991, a second retrospective exhibition was organized at the Curium Palace Hotel in Limassol.